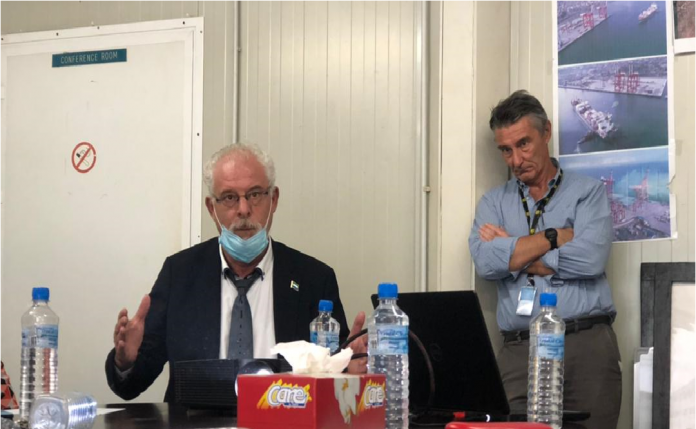 Freetown Terminal, a subsidiary of Bollore Transport and Logistics Group International has revealed stiff plans to rebel against and combat the issue of fake invoicing, which is said to have caused the Company to lose billions of leones to rogues.

This was according to Darrell Coker, Bollore’s Document/Terminal Analyst who was addressing Newspaper Editors yesterday Thursday 25th March, 2021 at a briefing on the Company’s operations within the first quarter (January-March 2021) of the year.

Country Director of the Company, Captain Fabjanko Kokan, thanked journalists for their usual support to the operations of the Freetown Terminal.

He called on the media to always cross check on issues that have to do with the Freetown Terminal before going to press. He informed Editors of the Company’s massive improvement in the equipment and storage facilities at the Port, making it enviably a hub for the West African sub region.

He ended by highlighting the massive investment the Company is making in the areas of capacity development, medical and insurance provisions for Sierra Leonean personnel.

Updating newsmen on the human resource sector of the Company, Madam Claurinda Morgan, Head of Human Resources, Freetown Terminal said within the last five years, the company has been able to increase its staff strength to 317 personnel, with Sierra Leoneans managing six out of the eleven departments in the company.

She said the Company wage bill currently stands at Le1,312,000 for the least personnel excluding other allowances like leave, medical and housing among other facilities.

Freetown Terminal, she went on, provides comprehensive medical scheme that provides medical attention to the worker, his or her spouse and four dependants below age eighteen.

She said lots of courses are designed and rolled out on a regular basis to ensure that personnel are brought up to speed with modern work ethics and practices. Chief of Operations, Abubakar Sesay, speaking on the Company’s Operations highlighted the challenges the Freetown Terminal is facing, while also explaining the positive impact and the capacity of the Port.

He said the Terminal now hosts bigger and larger vessels at a very low turnaround time and praised Bollore Group for massively investing in equipment, storage facilities, power generating plants and IT systems, which according to him has brought the port to speed with others in the sub region.

Patrick Sannoh is Manager Quality Health, Safety and Environment. He informed Editors of his department’s respective functions and achievements for the last few years.

He said the development of new policies and projects has greatly impacted on staff safety and comportment and the sustainability of the project.