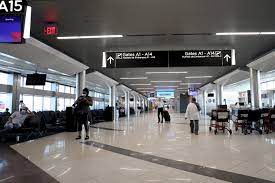 Bo City which is Sierra Leone’s second largest city surrounded by major economic activities such as mining, agriculture, trade among others, is on the verge of experiencing an unprecedented socio-economic transformation that will turn the South-East Region into a referential one-stop international business hub within West Africa.

For the past few weeks, massive earthwork has been ongoing on Bandajuma and Nyamdehun chiefdoms, precisely Nyalla section along the Bo-Kenema Highway, Bo district, Southern province of Sierra Leone, being part of the preparatory construction work for an ultra-modern international airport operation.

According to a reliable source, the Bo Ultra-Modern International Airport is part of Africa Gulf International Corporation (AGIC) plans to transform Bo city into a Smart City through a specific public-private partnership by creating a city of the future with respect to its sustainability and innovation as guided by the Sustainable Development Goals (SDGs), particularly goal eleven (11).

As an ultimate solution to Sierra Leone’s low airspace occupancy count, the proposed Bo Ultra-Modern International Airport along the Bo-Kenema Highway will be fully erected over an area of 7,500 acres, and is set to serve as the main catalyst for the rejuvenation of Sierra Leone aviation industry, thereby increasing the volume of trade, as a result of faster movement of persons and goods, promoting investments, developing the hospitality industry, consolidating road infrastructure among others.

The proposed project is part of AGIC’s long-term innovative developmental master plan of a new vision for the Southern Province as a tourist metropolis capable of hosting one hundred thousand (100,000) foreign tourists per year by 2025 and an International West African economic hub for manufacturing and trade logistics.

According to other reliable sources, the Bo Ultra-Modern International Airport project implementation is a massive capital investment that will impact on the socio-economic prospects of the country, as the entire funding arrangement has been fully secured through a pool of private prestigious partners and allied group of companies under the auspices of AGIC’s dedicated mission of transforming Africa into an investment heaven.