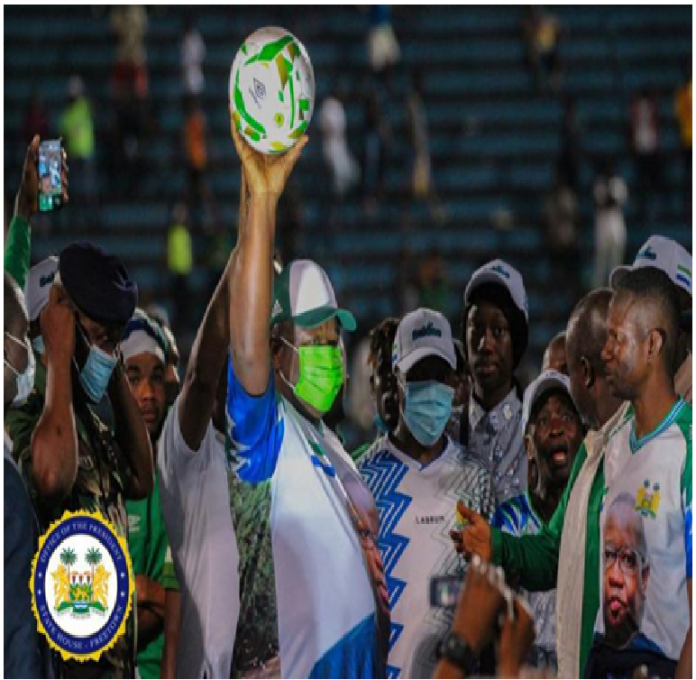 “…I’m also challenging you again for the AFCON in Cameroon”

“Your packages, that I promised you before the match, are all ready and they’re going to be given to you. I’m also challenging you again for the AFCON in Cameroon.” President Bio.

He made this statement while welcoming the country’s national football team at the Siaka Stevens Stadium in Freetown on Wednesday nightafter they defeated the Squirrels of Benin in the African Cup of Nations qualifier in Conakry, Guinea.

President Bio said 24 years ago they took the country to AFCON in South Africa and that they are taking the country to AFCON in Cameroon again after 24 years. He added that because he made a promise to the people of Sierra Leone that he would revive football, he had to make all necessary commitments to inspire the players to do their best.

He thanked the players for transforming his words into action, noting that he had no doubt in them that they would do more because he believed in them.

The President furthered that he was happy to be present at the welcome event and thanked everyone who worked toward the success of the match.

The Stars were welcomed at the National Stadium by the President himself and a large number of government officials and Sierra Leoneans from across the country after the team joined a float parade that started from the far east to the west of Freetown.

Introducing the players to the jubilant crowd at the stadium, Head of Corporate Affairs at the Sierra Leone Football Association, SLFA, Mohammed Benson Bawoh, stated that the journey that led to the country’s qualifying for AFCON after 25 years started on the 13 November 2019, adding that they were all happy to see the country celebrate such an achievement.

Team Captain, UmaruZengalayBangura, assured the President and the people that they would make the country proud at the AFCON games which are scheduled for early 2022 in Cameroon.

He said notwithstanding the challenges they had they were determined to bring victory for the country. He also asked for the nation’s continued support ahead of the AFCON games.

Head Coach, John Keister, thanked the President, his government, the players and all Sierra Leoneans for their support to the team. He stated that the team was part of the country’s development, adding that they were, therefore, keen to give the country a name that would be good for all.

President for the football association, Thomas Daddy Brima, described President Bio as a great man, adding that because of his love for sports he made several commitments for football and that was why they were all gathered at the stadium to celebrate. He thanked the players and described them as heroes for fighting a good fight for the country.