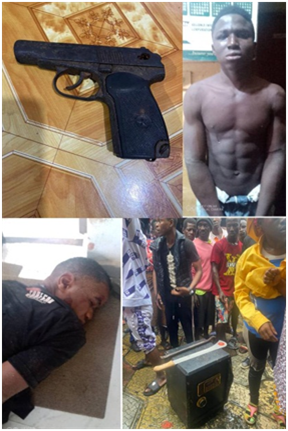 By Alhaji Daramy with support from SLP Media Unit

Personnel of the Sierra Leone Police attached to the Goderich Division yesterday 18th August 2022 at about 5:24am arrested 2 armed robbers, Alpha Mansaray residing at Metchem in Goodrich and Saidu Kamara.

The 2 robbers were illegally in possession of one pistol and others offensive weapons including brand new cutlasses, iron bar and a giant iron cutter.

Prior to their arrest, the robbers were alleged to have robbed off valuables including mobile phones, physical cash and other valuables belonging to Mohamed Alie Kamara, Isata Turay and Mohamed Bundu all of 3 Angola Town Off Peninsula Road in Goodrich.

Police say personnel from the Criminal Investigations Department (CID) and the Anti-robbery Unit visited the Scene of the Crime and exhibits were collected and put in police custody for further investigations, while suspects are detained in custody.