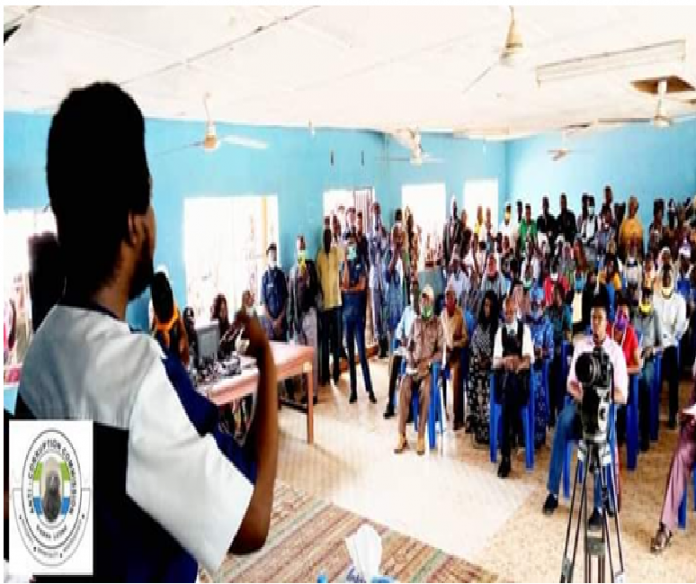 In the highly productive Agro-Business Kailahun district, lying approximately 20 miles North-East of Kenema and about 225 miles South-East of the Country’s capital, Freetown, the Commissioner of Anti-Corruption Commission (ACC), Francis Ben Kaifala Esq. has in continuation of his “Meet the People Tour”, held interactive engagements (Town Hall Meetings) with the  Paramount Chiefs, traditional authorities, and community stakeholders, including the Media, Civil Society Organisations (CSOs), Youth, Women, business people, health workers and teachers in Segbwema and Daru towns, in the Njaluahun and Jawei chiefdoms respectively.

Addressing the people of Segbwema and Daru at their respective Community Centres, Commissioner Kaifala said, the fight against corruption is not meant for Freetown only, but for the entire country. He furthered that, since his appointment by President Julius MaadaBio, the ACC has made significant strides to launder the then battered image of Sierra Leone from corruption-a process he said has helped regain the international community and investors’ confidence.

The ACC Czar told the gatherings that he is required by Section 5(2) of the Anti-Corruption Act of 2008 as amended in 2019 to account to the people of Sierra Leone on the conduct of the National Fight against Corruption, noting, the Meet the People Tour is informed by that requirement and is aimed at keeping the public up to speed with the work of the ACC and sustaining public support towards the fight.

Highlighting Sierra Leone’s performance in international indexes, which has been monumental, historic, consistent and progressive since 2018, Mr. Kaifala stated that he wanted to meet the people to know their concerns and to clarify misinformation they must have heard about the work of the ACC.

“In order to win the fight against corruption we must seek feedback, there is never a BAD FEEDBACK, it rather helps you to know what needs to be done and how it should be done” the Commissioner averred.

He outlined a number of activities the Commission has undertaken to tackle corruption emphasizing on the extensive Public Education, Systems Reviews in MDAs, Investigations and Prosecutions that have led to over 95% conviction rate of cases concluded in court.

He encouraged residents of Segbwema and Daru communities to deviate from practices that will constitute corruption.  He called on them to join the fight against corruption asserting that through our collective efforts corruption will be defeated.

Earlier, in their statements, the Paramount Chiefs of Njaluahun and Jawei, Hon. KokerJajua, and PC Musa NgobuklaKallon respectively, thanked the Commissioner and his team for coming to Segbwema and Daru to educate the people about corruption and update them on the activities of the Commission. They commended Commissioner Kaifala for his international recognitions and stated that President Bio made no mistake in appointing him to lead the national fight against corruption.

P C KokerJajua and PC Musa NgobuklaKallon II welcomed and urged the Commissioner to continue the daunting task and assured him of their undivided support.

Speaking on behalf of the Civil Society in Segbwema, Saffa Joseph Brima who is also the Justice of Peace (JP), said corruption has been endemic in our societies, but with the leadership of Commissioner Ben Kaifala, the narrative about the corruption fight has changed positively.

Joseph Amara, a veteran Journalist said, corruption has minimized in the last few years because of the collective efforts of Sierra Leoneans and the no-nonsense leadership of the Ben Kaifala. He said the media has played and will continue to play the required role in conveying anti-corruption messages and blowing the whistle on graft.

PC Kallon II, in a short ceremony at his Barry bestowed the Title of Honorary Chief on the ACC Commissioner in recognition and appreciation of his trail-blazing and remarkable leadership in the fight against corruption.

If God can help this nation with at least three of your kinds across the public service, this nation will be transformed said Chief Kallon.

During the interactive sessions at Segbwema and Daru, critical burning issues raised by the audience bordered on corruption and service delivery were adequately responded to by the ACC Boss.

Presentations of copies of the most recent published ACC News Bulletin and Newsletter “The Eye” to the Paramount Chiefs of Njaluahun and Jawei chiefdoms by the Commissioner climaxed the engagements.

The Commissioner ended his tour with courtesy visits to the Paramount Chiefs of Segbwema PC Coker Jajua and PC NgobuklaKallon II of Daru.