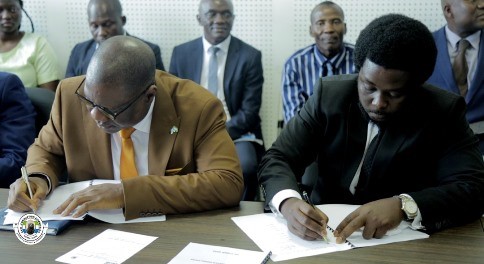 The Anti-Corruption Commission (ACC) and the Audit Service Sierra Leone (ASSL) have yesterday 13th October, 2022, signed a Memorandum of Understanding (MoU) geared towards strengthening and deepening partnership and collaboration to promote integrity, accountability and transparency in the public service throughout Sierra Leone.

Speaking at the event, the Commissioner of ACC, Francis Ben Kaifala said he was very thrilled and grateful for the renewal of the partnership as previous partnerships have been geared towards ensuring there is accountability and also to put Sierra Leone on a greater height when it comes to transparency.

He added that, what the ACC had done is to learn from mistakes from previous partnerships, “we have learnt from the past in preparation for the future to ensure better collaboration with ASSL”.

The Commissioner thanked the leadership and Management of Audit Service Sierra Leone for their support to the ACC in carrying out its functions.

The Acting Auditor General of ASSL, Abdul Aziz, in his address, thanked the Commissioner for renewing the partnership agreement which shows the dynamic leadership of the Commissioner.

“ACC and ASSL are strategic partners in the accountability sector. Therefore, this MoU will take this partnership to another level” he continued. He added that the partnership with ACC will be of great benefit to citizens of Sierra Leone.

Mr. Aziz furthered that, the ASSL have reviewed their Audit approach to urge MDAs to fulfil their functions in a transparent manner, by focusing on effective service delivery.

He ended his statement by commending the ACC Commissioner and urging him to continue the fight against corruption with great enthusiasm and energy.

Earlier, in his opening and welcome statement, the Deputy Auditor-General Aiah Gbondo-Tugbawa, who chaired the ceremony underscored that, as watchdogs’ institutions of government in ensuring accountability, ACC and ASSL have always worked in collaboration to ensure government entities follow due diligence in their duties.

He also stated that this MoU captures other areas that were not included in the previous ones (MoUs). He reassured ACC of a continued bilateral working relationship.

The relationship between the ACC and ASSL has over the years helped the Commission in its anti-corruption campaign. The ACC has effectively utilised the findings and recommendations of the Annual, Technical and Real time Audit Reports, which would highlight anomalies of misappropriation and other financial improprieties.

Through its interventions into these Auditor General’s Reports, the ACC has been able to recover public funds, prosecute corrupt public officials, and conduct systems and processes reviews of Ministries, Departments and Agencies (MDAs) of government.

According to the citation of the MoU read by the Director, Public Education and Outreach ACC, Patrick Sandi, the ACC and ASSL will collaborate with each other to ensure that any request made by one party to the other shall be promptly attended to. This includes the sharing of information between the two institutions as it would relate to their functions and mandate.

Moreover, the MoU states that in the conduct of an Audit or a Review, where ASSL is of the opinion that fraud or financial malfeasance has occurred, the ASSL shall duly inform the ACC-SL for on-the- spot intervention prior to the submission of the said Audit Report in line with Section 78(1)(d) of the Anti-Corruption Act 2008 (as amended in 2019).

The MoU also notes that ACC and ASSL will provide institutional and or professional support and expertise to the other upon request were the same is requested and available without the requesting party incurring any cost.

The ACC is a corporate body established by statute for the objects outlined in the Anti-Corruption Act 2008 (as amended in 2019) including, to take all necessary steps to prevent and or eradicate corruption in Sierra Leone, to educate the public on the ills of corruption, to investigate and prosecute all incidents of corruption offences; and to co-ordinate the National Anti-Corruption Strategy.

The signing of the MoU by the two leaderships of the ACC and ASSL formed the high point of the ceremony.