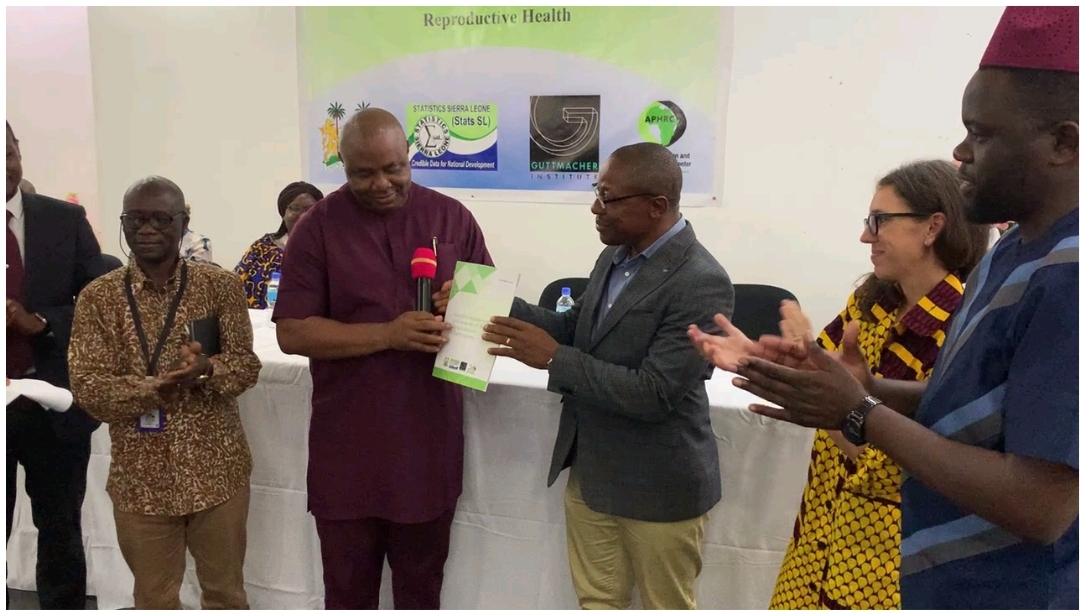 The study titled; “Abortion Incidence and Severity of Related Complications in Sierra Leone” reveals that in 2021 the total number of induced abortions in the country is Ninety-one Thousand, Four Hundred and Ninety-four (91,494) and the national abortion incident rate is 44.2% per 1,000 women of reproductive age between 15-49 years. The report was handed over to the Health Ministry by Statistics Sierra Leone at family kingdom in Freetown.
The Abortion Incidence and Severity of Related Complications in Sierra Leone report was done in 2021 by the Government of Sierra Leone, Statistics, Guttmacher Institute, and African Population and Health Research Center. The study says the national unintended pregnancy rate for last year is 70 per 1,000 women. While presenting the findings, the Research Officer for African Population and Health Research Center (APHRC) Kenneth Suma said Southern region had the highest with 110 followed by Northern Region with 86 pregnancy rates per 1,000 women. He noted that the abortion rate is higher in Sierra Leone compared to many neighboring countries.
From the research 38% out of all the pregnancies in 2021 were untended and 63% of those unintended pregnancies ended in abortions with serious complications for many. The Chief Medical Officer, Ministry of Health and Sanitation Dr. Sartie Kenneh cited that Unsafe Abortion contributes significantly to Maternal Mortality in Sierra Leone which has now been declared an emergency.
Dr. Kenneh committed that the Health Ministry will use the report as a call to action to prevent incidences of unwanted pregnancies in Sierra Leone. The study recommends liberalizing the laws around abortion. Increase access to quality family planning services, community education and awareness programs, and improving access to post- abortion care.